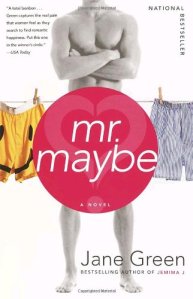 This romance Brit lit. is cute, funny at times and sexy. I’ve read this book numerous times that I’ve lost count. It’s a light and quick read. I enjoy the characters a lot – mostly Nick. Libby is someone that I can see myself being friends with.

Libby Mason is a 27 y.o. looking for her Mr. Right. Only problem is that her idea man isn’t so easy to find. She has very high expectations for Mr. Right. She wants someone wealthy to sweep her out of her small flat apartment. She expects the man to pay when taking her out on dates. And thinks that his friends would be the same fun good natured friends she has; thus allowing her to feel comfortable around them.

So it’s no wonder that Nick feels inadequate. A struggling writer with a VERY small apartment (a one room bedsit) and is living ‘”on the dole” (unemployment checks). He can’t afford to always pay for their dates and his friends are blue-collar, left-wing friends. So because of this she feels having just a no strings attached relationship while she waits for Mr. Right is great. Otherwise Nick’s financial flaws, he’s really great. He makes her laugh, great in bed and her friends and brother love him. But Nick thinks she deserves better so ends their fling – blaming it on his commitment-phobia.

She then meets this rich financier Ed McMahon. He’s older than Libby and more “sophisticated.” He’s a little snobby and thinks her friends aren’t so grand. Ed and his friends makes Libby’s self-esteem decrease. And he’s not a great lover in bed. But hey, so what? He’s rich. Right? He can buy her a 1,500 pound wardrobe. Hesays he’ll still love her if she’s fat. (This might have been said jokingly after he bought an insane amount of food for her because he doesn’t know what she likes. Nike does.).

So despite all his flaws, she agrees to marrying Ed. Being engaged isn’t what she’d hoped for (no surprise there), especially considering Libby doesn’t love Ed and still has feelings for Nick.

Of course the end of this is predictable. But Libby does change and grow at the end. She learns from her mistakes of wanting a man to give her a rich sophisticated life and high expectations of the Mr. Right.

Mr. Maybe is by far the best Green book. This is a favorite Brit lit romance. Jemima J is good but I only read it once.