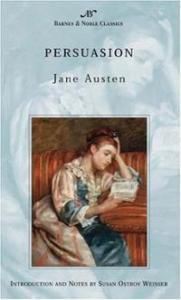 “Persuasion” is the book a lot of people can relate to, including myself. A story of letting “The One” get away and the miracle of second chances. The title may not have been her choice (brother Henry named the book after her death), but this is all Austen. It shows how both society and greed for money can be very persuasive.

The father, Sir Walter Elliot, is a selfish man who falls prey to extravagants. The widow with three daughters becomes indebted. He is influenced to rent out their home and stay at Bath. He is influenced by his eldest daughter, Elizabeth and Mrs. Clay (a greedy widow of slight lower class to the Elliots). Lady Russell is a friend of the Elliots and godmother to Ann. The Lady is the cause to the way Anne Eliot (at age 18) loses her true love, Frederick Wentworth. Lady Russell finds this was erroneous for persuading Anne’s decision.

At the age of 27, Anne Elliot is classified as spinster. Her two very selfish and arrogant sisters have both been indifferent towards their middle sister Anne. Anne has let everyone control her in every way. In my opinion, I can understand Frederick’s hesitation towards rekindling his love to Anne.

The novel is a favorite of mine. It is shorter than all of Jane’s novels and the storyline more simple, but it’s still a great love story. I agree that it is like a Cinderella story. I sincerely recommend this. 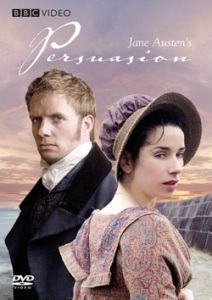 One thought on “Jane Austen’s Persuasion”