A Thursday theme of mine here where I’ve been posting some of my old reviews.

This week is an old movie review to a French film. Watched and reviewed in November 2013. 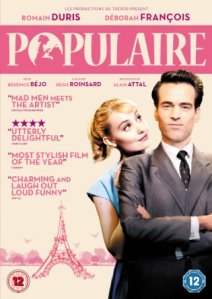 I really loved this movie. I watched it on my kindle with Netflix streaming (on the app). It’s a romantic comedy in the late 1950’s setting. The name Populaire is for the famous typewriter machine by Japy Populaire. It’s a feel-good-romance, in which it’s a little predictable but with a little realistic touch to it. There is more to the plot than the romance and I liked that. I was laughing and cheering for Rose.

The story focuses well on Rose Pamphyle – played by Déborah François. She wants to be more than a store clerk for her father’s shop and be engaged to a local mechanic. But she’s very clumsy. She then becomes a secretary for Louis Échard (played by Romain Duris), even though she only uses two fingers to type and causes chaos (accidently shreds important documents and broke shredding machine). But that’s all ok for Louis because he plans to have Rose become the World Champion in typewriting.

The acting was really good. Sometimes I was so focused on them that I’d forget to read the subtitles. I really liked Rose. The actress did a great job, especially with her typing skills.

There’s other subplots like Louis and his friends, Marie and Bob Taylor (Bérénice Bejo and Shaun Benson) and their two kids. Marie Taylor is Louis’s ex so that gave a good twist. I liked her as well.

I really loved this movie and now am in the lookout for a US region dvd. Unfortunately they only have Region 2 and not sure about this blu-ray edition.