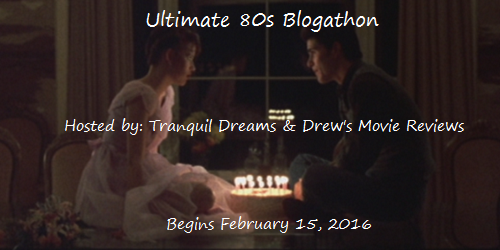 I’ve been trying to think of the one movie to review for the Ultimate 80s Blogathon with Drew and Tranquil Dreams. The Blogathon is asking for my favorite 1980s movie. One movie that was my favorite from the 1980s decade. One. Well I have so many, so I broke it down to a 4-way tie: The Goonies, The Princess Bride, Star Wars VI: The Return of the Jedi, and Pretty in Pink. And then I broke the list down again. I thought what would best represent my 80s experience. And I thought of John Hughes, the guy that was able to capture high school life in the 1980s so well. So Pretty in Pink is my pick.

Short Synopsis: “A poor girl must choose between the affections of her doting childhood  [Best Friend] and a rich but sensitive playboy.” (IMDb)

My Thoughts: This is a favorite of mine from the Brat Pack and Molly Ringwald movies. When this movie was released I was 10 years old. It’s now been  just about 30 years later and I still love this! The movie starts off with The Psychedelic Furs‘s “Pretty in Pink.” That song still makes me want to do some dancing along with it. As for the story, the love triangle and unrequited love was so good. John Hughes thought so too because he made Some Kind of Wonderful rights after this, which had a similar storyline. I liked that movie too, but not like Pretty in Pink. A lot of John’s films has me feeling nostalgic of those times in the 80s. I think this movie gives a more realistic version of that decade.

John Cryer as the adorable Phil “Duckie” Dale. His unrequited love for Andie tugged at my heart. John Cryer was great in this role. No one but him could pull off playing it cool and protesting about the ladies bathroom being better than the men’s room after being thrown into the women’s bathrooms by bullies.

What has John been up to since then, well he did a lot of non-blockbuster movies and tv shows that didn’t last long. That is until the show 2 and a Half Men, where he’s won two Emmy Awards for his role. But even the creators of the show wanted some of Duckie Dale too.

I don’t blame them. John’s still Duckie to me. There’s also his unrequited love for Andie. According to Wikipedia, there was an Alternate Ending where Andie picks Duckie over Blane. Thank goodness there was a screen testing and the creators accepted their opinion about changing the ending. Thanks to those people Orchestral Manoeuvres in the Dark (OMD) created a song for the new ending, “If You Leave.” And they made the song all within 24 hours too.

I might look into reading the H. B. Gilmour’s book he wrote based on the movie’s script with the alternate ending.

I do like Duckie’s Happily Ever After the most. It’s both cute and funny. 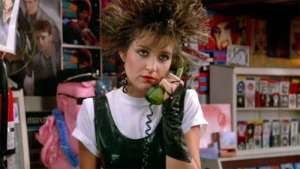 “Oh why can’t we just start old and get younger.”

Annie Potts as Iona and all her various looks. My favorite is her Siouxsie Sioux look. She also gives some advice and opinions to Andie. My favorite is when Iona tells Andie about “Wishful Make-upping” while Andie’s waiting for Blane to show up for their first date

Molly Ringwald as Andie is someone that I really liked. She’s strong and a smart heroine. And the character designs and makes her own clothes. If you want a full dissection of Andie’s wardrobe, this Buzzfeeds article has 17 of them. And btw, even that article noted that Andie had more than just the color pink in her wardrobe. And I do admit to trying some of these fashions at one time during the 80s, along with the Madonna and Cyndi Lauper look.

The Posh and Rich Crowd

Andrew McCarthy as the rich guy that is actually a good guy. His big flaw is not standing up against Peer Pressure. At least the guy admits to over estimating his friends during their first date. And he really does try to find some common ground with Andie.

James Spader as Steff McKee and his very posh and preppy friends. Oh James is good at playing the rich jerk in this movie. I still think that Steff deserved the beating that Duckie gave him for saying those mean things about Andie.

This movie has the real stereotypes of who’s who in High School during the 1980s. The major thing is the Posh/ Popular crowd (hangs out indoors) and the other crowds (hangs outdoors). As Steff describes the other crowds as Mutants and Trash.

Steff: “That girl was, is, and always will be nada!”

All of John Hughes related films has an outstanding music soundtrack. Pretty in Pink has some of my favorites. A lot of the songs are New Wave and post-punk. My favorites from this movie is the bands, from OMD to The Smiths.

The Huffington Post has even rated it as 15th in their list: Best Movie Soundtracks – The 15 Film Music Compilations That’ll Change Your Life.

The soundtrack is also #11 out of 25 in Rolling Stones Magazine’s list: The 25 Greatest Soundtracks of All Time.

Pretty in Pink by The Psychedelic Furs

Orchestral Manoeuvres in the Dark (OMD)’s “If I Stay”

(video from the movie).

John Cryer still has it.

The vinyl album that Blane buys the first time he goes to where Andie works.

Appear in the film performing “Positively Lost Me” and “Rave-Up/Shut-Up”.

Appear in the film performing “Rudy”

The heartbreak song Duckie listens to.

Echo & the Bunnymen’s “Bring On the Dancing Horses”

And according to IMDb’s Trivia and Facts… The book Andie hands to Blaine the second time he comes into Trax is “In His Own Write” by John Lennon.

18 thoughts on “Rewatching Pretty in Pink”