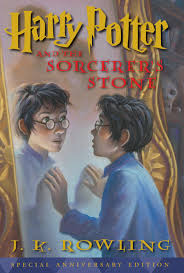 Harry Potter and the Sorcerer’s Stone by J. K. Rowling 5★♥

At first I wasn’t so sure about reading this book. Mostly beause I prejudged this as a young adult book only. This was around 2001. The books at this time were given to my youngest sister (I was 22 at the time making her 16). She read them and then handed them to me hoping I’d read them -little sis knowing I love to read. I forgot about them until the first movie came out. I don’t recall if I read the book first or saw the movie. But either way, I learned I was wrong to prejudge this series. Since then I’ve been hooked to everything Potter.

When the book ‘Order of the Phoenix’ was released in 2003, I was in the Navy. I was lucky enough to get ‘Order of the Phoenix’ and later ‘Half-Blood Prince’ in the Bloomsbury publishing editions. So as of now I currently own all 7 Scholastic hardcovers, 7 Scholastic paperbacks and 2 Bloomsbury hardcovers. As well as ‘The Tales of Beedle the Bard’ hardcover. And ‘Harry Potter and the Sorcerer’s Stone,’ 10th Anniversary Edition [Deluxe Edition] [Hardcover]. I also own all 8 of the movies (all special editions of course).

I am currently 36 years old and I’m still a fan. A fan of all Harry Potter. And a fan of J.K.Rowling -purchased ebook of ‘Casual Vacancy’ the day it was released.

Harry Potter is a very charming orphaned boy who finds out he can do magic. He then goes to this amazing school called Hogwarts. A school even I wish I could attend to.

One thought on “Harry Potter and the Sorcerer’s Stone”